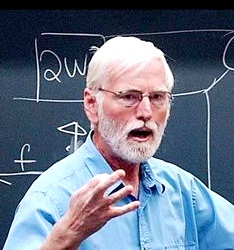 Dr. Mellema attended Gustavus Adolphus College, and graduated in 1972 with a double major in physics and mathematics. Immediately after graduation he left to join the Peace Corps in Malaysia, where he became a high school physics and chemistry teacher. All his science teaching there was conducted in the national language, Malay. He received my Ph.D. in physics from Ohio University in 1983, and stayed for another year as a physics instructor and a post-doctoral research associate.

In 1984 he was appointed as a post-doctoral research associate with the experimental nuclear physics group at the University of Wisconsin, Madison. He worked on experiments in radiative capture using polarized beams. In 1986 he came back to Gustavus Adolphus to join the physics faculty, and in the years since has taught almost every course in the physics curriculum, from history and philosophy of science, to Asian Cultures including three study-abroad courses to Malaysia. He remains passionate about physics, education in the liberal arts tradition and teaching students about the workings of the Universe.